Yuri’s story begins like that of so many other shelter dogs. She arrived to the Cuyahoga County Animal Shelter in Valley View, Ohio in bad shape. She had pneumonia, scars on her back and legs, was heartworm positive, and pregnant. Deputy Dog Warden Amanda Kopec had a soft spot for Yuri right away. Little did she know that Yuri would bloom into a talented resource for the shelter and would wiggle her way into Kopec’s life for good as a foster failure. Yuri and Her Puppies Failed to Thrive

Yuri gave birth at the shelter, delivering a large litter of puppies. Despite receiving all of the medical attention she and her puppies needed, they failed to thrive. Kopec could see that the shelter life was taking a toll on Yuri. Kopec told Petco Foundation that Yuri was so sad. Kopec would sit with her during meals, coaxing her to eat. When she wasn’t improving, Kopec decided to take her and the puppies home as fosters. They were both devastated when one by one, Yuri’s puppies died of canine herpes. Broken hearted, the pair leaned on each other for support. 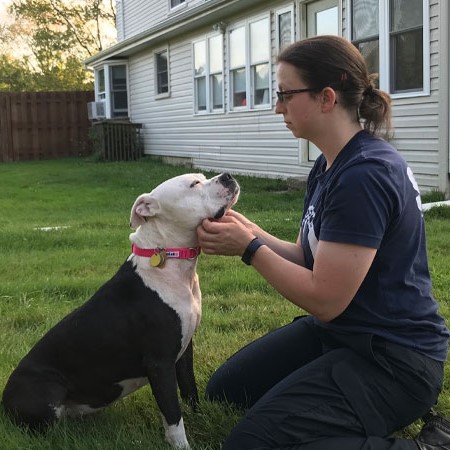 Kopec noticed that Yuri had some unusual tendencies. While walking, she would often wobble and pace. Kopec also noticed that she would startle when approached from behind. When called, she wouldn’t come unless she was looking at Kopec. After a series of tests, Yuri was diagnosed with neurological abnormalities and deafness. These conditions were permanent and her symptoms would never go away. This worried Kopec. She wondered in Yuri would be accepted by other dogs and felt her adaptability was hindered.

Yuri Turned Out to be a Play Group Rock Star

Kopec started taking Yuri to play groups at the shelter. She was concerned about how other dogs would treat her due to her quirks. She also wondered if her scars were a sign that she tumbled with other dogs in the past. As it turned out, though, Yuri was a rock star! Not only did she play very well with other dogs, she became a leader among them. She taught dog after dog how to behave in play group and so they could be social and compatible with other canines. These skills are tremendously beneficial to all dogs looking for forever homes. 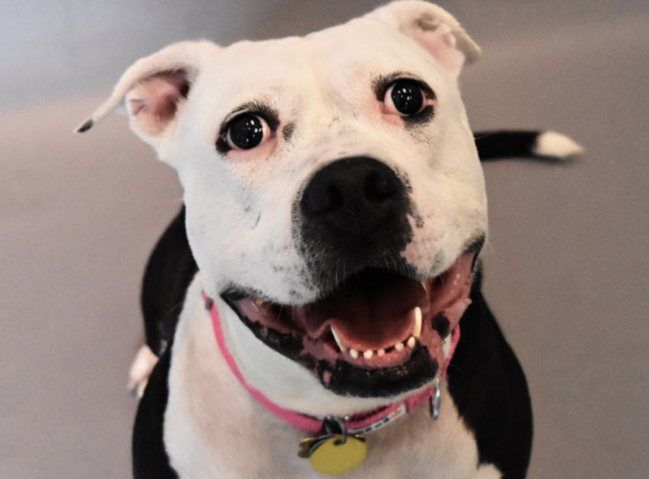 Yuri and Kopec Work as a Team

Over the course of a year, Yuri and Kopec teamed up, helping shelter dogs adjust to play groups and gain the social skills they need to be adoption ready. Naturally, the pair bonded more and more and eventually, they made it official. Kopec adopted Yuri and became a foster failure. Yuri’s perseverance inspired confidence in Kopec, who now feels confident working with dogs who need extra support and patience.

Kopec shared her story with PetCo Foundation in nomination for the 2019 Holiday Wishes Award.

Each year, the Petco Foundation invites adopters to share the story of how their adopted pet changed their lives during the annual Holiday Wishes campaign, giving the organization that they adopted from a chance to receive a grant award. This story by Amanda won Cuyahoga County Animal Shelter in Valley View, Ohio a 2019 Holiday Wishes award.

Do you want a healthier & happier dog? Join our email list & we’ll donate 1 meal to a shelter dog in need!