Dear Bark: My husband and I are having a disagreement. He wants to take our two-year-old dog to the dog park for socialization because we don’t want her to become rusty at getting along with other dogs. But I have read that you can only socialize puppies—that it doesn’t work for adult dogs. Can dogs of all ages be socialized? Should we take our dog to the dog park?

In the world of canine behavior, the word “socialize” has a specific technical meaning (which I’ll address shortly), but it is also commonly used to describe another activity: to engage in social interactions. The latter is what your husband seeks for your dog at the dog park. As long as she enjoys other dogs and can play appropriately with them, she is a good candidate for visits there.

Socializing a puppy and providing an adult dog with a social life are two different things.

There are a few caveats. Make sure that the dog park is one where people are responsible about the dogs they bring and about monitoring behavior, and that there is enough room for dogs to romp and play without feeling cornered by the crowd. My favorite dog parks have many acres, trails for walking and open areas for playing. Smaller parks can work as long as they are not too small for the dogs to spread out a bit and run around.

GET THE BARK IN YOUR INBOX!

Sign up for our newsletter and stay in the know.

Although I’m in favor of dog-park visits if certain standards are met (which sounds like I’m siding with your husband), you are correct that only puppies can be socialized, as the term is used by experts. To socialize means to expose a puppy to a variety of new experiences during a critical period of their lives. The critical period in puppies is from about three to 14 weeks of age; during that time, dogs are particularly receptive to learning that new things are not scary. It is much harder for them to learn to feel comfortable about new things later on in life. 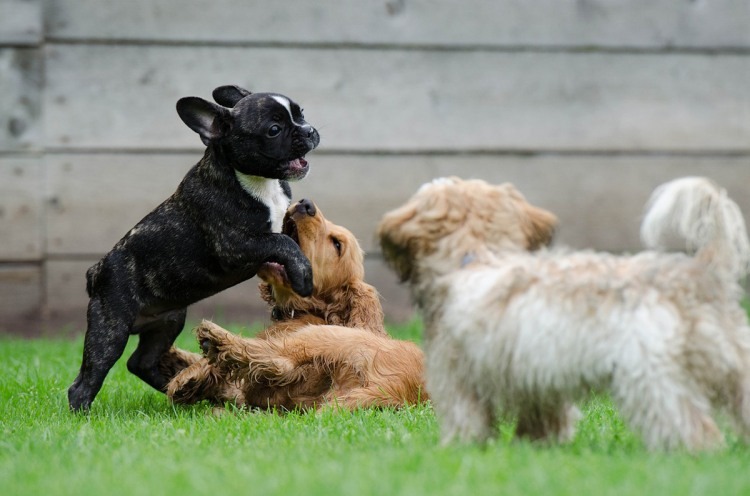 Image by Katrin B. at Pixabay

A good analogy is learning a language. When we learn a language as young children, we do it well and we do it thoroughly. Once we are beyond childhood, we can learn languages, but rarely can we learn them as well and with as little effort. The goal of socializing puppies is to help them reach a point where they have the social skills necessary to engage with other dogs, people and perhaps cats. We also want them to be able to handle cars, bikes, skateboarders, shopping carts, musical instruments, the TV, the sound of phones and alarms, and so much more—all things that they will encounter throughout their lives. We want them to be as fluent in daily life as we are in our first language.

The critical period is also called the sensitive period, and dogs are very sensitive to the experiences they have at this age. Good experiences make it likely that they will easily accept those things throughout life, but bad experiences can be traumatic and especially hard to get over. Positive experiences are the goal when socializing a puppy, so the focus should be on quality (exposing the puppy to new things in pleasant ways) rather than focusing on quantity (exposing the puppy to as many things as possible, no matter how overwhelming such experiences may be).

It’s easy to overwhelm puppies, which is one of the reasons I don’t like puppies to go to the dog park. It’s far too likely that another dog will overdo it (perhaps aggressively, but more commonly due to an overabundance of exuberance) and scare or overwhelm the puppy, setting up a young dog for a life of concern about other dogs. Dog parks are better for dogs once they are past the puppy stage, but puppies can and should have play dates with very small groups of sociable dogs who play appropriately.

Jargon can create communication problems and misunderstandings in any field, especially in a field such as behavior, which uses many common English words in specific and sometimes non-standard ways. Only puppies can be socialized in the technical sense, but adult dogs can benefit from social interaction. Not all dogs need to be around other dogs or benefit from being social in the general sense, but many do. It’s great for dogs who like other dogs and can play appropriately to spend time at the dog park, as long as it is one where people behave responsibly and there’s enough space.